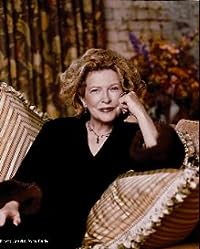 Have you ever met someone you really admired and found it to be a disappointment? Somehow they’re just not as nice as you thought they’d be. Well. That is NOT the case with Jan Karon. I’ve previously cited her as one of my favorite authors (along with Wendell Berry and Jane Austen–now there’s a dinner party!). So when I saw that she’d be speaking in the town where I live, I bought a ticket immediately.
On Monday evening I spent a delightful hour listening to Jan Karon chat with her audience about writing and her life and her characters (who might as well be real, as far as most of her fans are concerned). We got an Uncle Billy joke and heard how Father Tim got diabetes. (Jan thought she might be diabetic and thoroughly researched the illness. She wasn’t, but hated to waste the research.)
It was charming. And then she took the time afterwards not just to sign books, but to spend a few moments with any of her readers who wanted to meet her. REAL time. She gives her readers the kind of attention that makes them feel like she might really and truly remember them. I once had a chance to interview Kevin Bacon for a newspaper article–he was nice, but I had no illusion that he would remember me after I left the room. I think Jan Karon just might.
But here’s the best part. She asked during her talk if there were any writers in the room. I raised my hand along with half a dozen others. When she met me afterwards, she said, “Oh, you’re one of the writers!” I agreed that I was and she asked about my book. She listened. She thought my idea sounded good. She looked me in the eye and she said, “I believe in you.”
And you know what? She does. Jan Karon believes I have a book–or more–in me. I’ve had lip service before. I know how it feels when someone is being polite. Jan Karon is an encourager, but I don’t think she’s one to blow smoke. I can’t begin to tell you how awesome I felt when I walked out of that room having spent a few moments with the nicest best-selling author on the planet. I loved Jan Karon’s books before I ever laid eyes on her. Now I love Jan Karon.
Here are a few interesting things I learned about her:
-She’s a sincere Christian. She talked about God’s leading in her life. She talked about prayer. She knows who to thank for her success and as Uncle Billy would say, “She doesn’t have the big head.”
-She’s tiny! She hugged me and I think her head came to my shoulder.
-She’s funny and her humor is often the self-deprecating kind. She told a story about her skirt falling off in a ritzy restaurant.
-She has a deep appreciation for her fans.
-She is not going to kill off Father Tim anytime soon. As she said, “Do you kill the goose that laid the golden egg?”
-And here’s the biggest scoop of all for everyone who is sad that she gave up writing Mitford books for Father Tim books. Her next book will be another Mitford book!! If you’re a fan, you know how exciting this is!