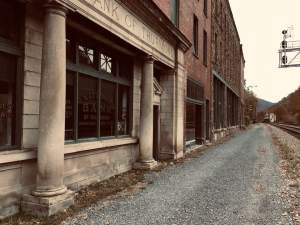 My soon-to-release novel, When Silence Sings, is set in part in Thurmond, WV. While there’s plenty to make this southern WV town interesting, one of the main things is that in the early 1900s it was a rich boom town. Today, it’s essentially a ghost town owned largely by the National Park Service.

Of course, the thing that’s nifty about that, is the main street (a railroad track) is largely the same as it was in 1930–the year of my story. Many of the buildings are still there–the Thurmond National Bank, the Mankin Drug Company, and the train depot among others. Which means I had a chance to walk into the pages of my story.

As the day draws closer for readers to step into those pages as well, I thought I’d share some fun facts about Thurmond.