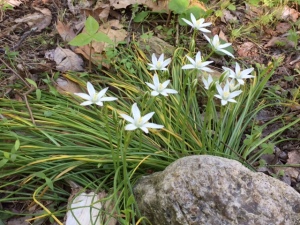 That’s what our pastor talked about yesterday. I always thought it meant something like kindness–a sort of being careful with whatever is fragile in life. But here’s a definition from a Bible dictionary:

“Sensitivity of disposition and kindness of behavior, founded on strength and prompted by love.”

Which makes gentleness a whole lot more complicated than I thought. It’s certainly not weak. It doesn’t mean to be a pushover. It’s not just being nice. The first part of the definition is pretty much what I expected, but that second part, that’s complex.

Gentleness is founded on strength. Picture a man’s large, strong hand cradling a newly hatched chick. Gentleness has the power to destroy . . . and yet it doesn’t. Which is where that last bit of the definition comes in.

Gentleness is prompted by love. Gentleness has power and strength, yet chooses sensitivity and kindness out of love. It doesn’t lash out. Doesn’t knock anyone down or push them around just because it can.

As a matter of fact, it seems like it might be impossible to be gentle unless you are strong and loving. So the question then is–what is my strong foundation? What prompts me to love?

All I can say is that all too often I feel weak and . . . well . . . not loving. That would be ME operating under my own power. So if I want to be gentle (and I do) then I’d better find my source elsewhere.

I Peter 3:14-17 – But even if you should suffer for what is right, you are blessed. “Do not fear their threats; do not be frightened.” But in your hearts revere Christ as Lord. Always be prepared to give an answer to everyone who asks you to give the reason for the hope that you have. But do this with gentleness and respect, keeping a clear conscience, so that those who speak maliciously against your good behavior in Christ may be ashamed of their slander. For it is better, if it is God’s will, to suffer for doing good than for doing evil.

I guess being gentle is tougher than I thought. But isn’t that the way with most worthwhile endeavors?

2 thoughts on “Fruit of the Spirit – Gentleness”