One of the challenges of being an author is the overlap between stories. Until the Harvest was recently up for an award, A Tapestry of Secrets released a month ago, and I’ve just turned in the manuscript for my fourth novel yet to be named.

You’ll forgive me if the stories run together.

So, although it’ll be a year before you can officially meet my latest cast of characters, I thought I’d give you a peek into the world filling my head these days and the people who populate it.

The story begins with a mine accident in West Virginia and quickly moves to South Carolina the summer before Hurricane Hazel wiped the coast clean in 1954.

One of the delights of being an author these days is putting together a Pinterest board for inspiration. I’m sharing a few of the photos here, but if you’d like to see more, click on over and check out the images I’ve saved. The photo I’m using for my hero looks so much like I imagined him, I have a hard time remembering Judd isn’t real. The photo is from the National Archives of a miner about to start work in Richlands, Va., in 1974.

changed into plaid pedal pushers, flats, and an eyelet blouse. She tied her hair back into a ponytail and curled it just so.”

GRANNY JANE – The cabin was little more than one, big room with blankets for partitions. An old woman lay in a bed in the far corner, a quilt tucked snug around her solid form. Judd eyed her neatly braided hair coiled on her head like a crown. Her veined hands were folded over the covers and her eyes were bright. Somehow he thought someone who was 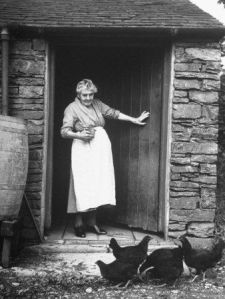 dying would look worse off.

A year seems like a long time, but I know it’ll be here in the blink of an eye. Can’t wait to carry you with me from Bethel, WV, to Myrtle Beach, SC, and then to Logan, KY. Judd, Larkin, Granny Jane, and a whole bunch of other good people will be mighty glad to meet you when the time comes.